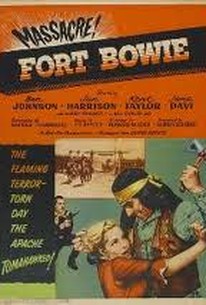 There's a measure of sympathy for the Apaches at the beginning of Fort Bowie. Under the tyrannical rule of ambitious Major Wharton (P. Ian Douglas), a cavalry detachment slaughters a band of Apache who've arrived with the intention of surrendering. A counterattack is inevitable, but before this happens the story is sidetracked by the jealous behavior of Colonel Garrett (Kent Taylor). When stalwart young Captain Thompson (Ben Johnson) resists the romantic overtures of Garrett's wife Allison (Jan Harrison), she screams "Rape!" and Thompson finds himself facing court-martial and execution. This plot strand and several others are resolved after the Cavalry is forced to attack its own fort following an Apache takeover.

Johnny Western
as Sergeant
View All

Predictable B western about a fight between the Cavalry and the Indians.

There are no featured reviews for Fort Bowie at this time.