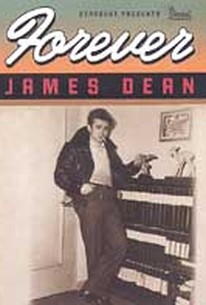 In the 1988 documentary Forever James Dean, we see Dean in his first appearance on film, in a Pepsi Cola commercial. We see a color vignette from the 1951 religious TV special Hill Number One, with Dean as a Biblical apostle describing the Resurrection. We watch Dean honing his craft in clips from such network TV dramas as "I'm a Fool" and "The Unlighted Road". We are treated to choice selections from his trio of starring films: East of Eden, Rebel Without a Cause and Giant. And we are invited to cringe at Dean's ominous "Drive carefully" warning during a staged interview with Gig Young. ~ Hal Erickson, Rovi

There are no critic reviews yet for Forever James Dean. Keep checking Rotten Tomatoes for updates!

There are no featured reviews for Forever James Dean at this time.