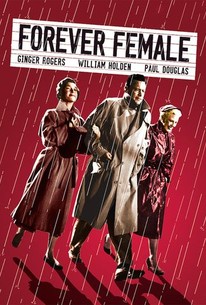 Sir James Barrie's whimsical play Rosalind was updated and urbanized as the 1953 film Forever Female. Ginger Rogers plays a veteran Broadway star who has optioned a play written by William Holden. Though on the less sunny side of 40, Rogers expects to play the leading role, that of a 19 year old girl. Producer Paul Douglas--who also happens to be Rogers' husband--insists that Holden alter the age of the main character. Meanwhile, iron-willed ingenue Patricia Crowley, who is far more suited to the part than Rogers, begins her own campaign to win the role. Far more enjoyable than the plot mechanics of Forever Female are the sly showbiz inside jokes, courtesy of screenwriters Julius and Philip Epstein. It's also fun to tick off the familiar faces in the supporting cast, including George Reeves as a stuffy suitor, future Mrs. Bing Crosby Katherine Grant as an auditioning actress, and Gunsmoke and Dragnet villain Vic Perrin as an effeminate set designer. ~ Hal Erickson, Rovi

Marjorie Rambeau
as Herself

Pat Crowley is the big news in the film. As the struggling young hopeful she gives a laudable performance for a newcomer.

There are no featured reviews for Forever Female at this time.