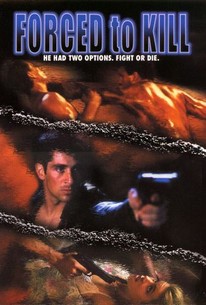 Stunt man Corey Michael Eubanks plays a repo man in Forced to Kill. While claiming a Jaguar, Johnny (Eubanks) is captured by a strange family. Before long, he's in the thick of a subrosa boxing tournament, where bare fists are de rigeur and the participants are obliged to kill one another. A question: if Eubanks is such a crackerjack stunt man, how'd he allow himself to get into this mess? (and he wrote the script, too!) Check your brains at the door: the action is terrific. The supporting cast of Forced to Kill includes filmmaker Ron Howard's father Rance and brother Clint.

Tom Bolger
as Gang Member No. 1

Cole McKay
as Gang Member No. 2

Joseph Gallo
as Gambler No. 1

Arthur Rothman
as Gambler No. 2

Critic Reviews for Forced to Kill

There are no critic reviews yet for Forced to Kill. Keep checking Rotten Tomatoes for updates!

Audience Reviews for Forced to Kill

There are no featured audience reviews yet. Click the link below to see what others say about Forced to Kill!