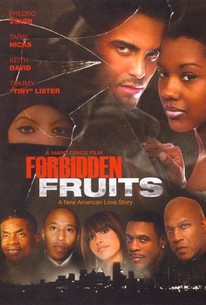 Fredro Starr, Taral Hicks, Keith David, and Tommy 'Tiny' Lister co-star in the interracial urban romance Forbidden Fruits. Set in the heart of the Motor City, the picture traces the experiences of Shawn, a black college student who becomes smitten with a Chaldean-American girl and must contend with the ethnic, religious, and racial barriers in their relationship. He also combats outside influence from his "gangsta" cousin, who disagrees with the romance and will do anything to silence it - even if it means resorting to more drastic and violent measures to get Shawn to comply.

There are no critic reviews yet for Forbidden Fruits. Keep checking Rotten Tomatoes for updates!

There are no featured audience reviews yet. Click the link below to see what others say about Forbidden Fruits!