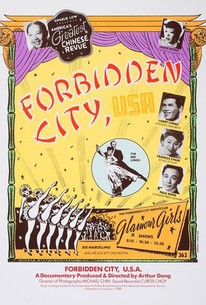 Although their immigrant parents retained many of the cultural mores of China, the Chinese-Americans in San Francisco of the 1930s and '40s embraced American popular music and culture. Directed by Arthur Dong, this documentary, televised on the PBS series The American Experience, profiles the San Francisco nightclub known as Forbidden City. As a West Coast, Chinatown variation on Harlem's famed Cotton Club, Forbidden City enticed WASP Americans with its "Chinese Sally Rand," "Chinese Sinatra," and "Chinese Sophie Tucker." Highlights include long-lost original recordings and archival filmed performances at the club, as well as photographs, and interviews with people such as the owner, Charlie Low. This film was co-winner of the Hawaii Film Festival's Best Documentary of the Decade. ~ Steve Blackburn, Rovi

An illuminating look at the once-famous San Francisco nightclub.

Their recollections are generally light-hearted, but not without a dark strain.

Those who stay with it will be rewarded with a rare slice of life as life used to be, before it got so much better, and so much worse.

Dong's film gracefully shows how one semi-underground club brought all manner of American contradictions to the surface.

It brims over with nostalgia for a more glamorous and innocent show-business era, yet is a commentary on racial stereotyping and on the insidiousness of discrimination.

Dong's juxtaposition of vintage clips and photographs and contemporary interviews with Forbidden City dancers, singers, patrons and employees create a rich portrait of both the club itself and the larger cultural forces that shaped it.

There are no featured reviews for Forbidden City, USA at this time.