For the Love of Movies: The Story of American Film Criticism (2009) 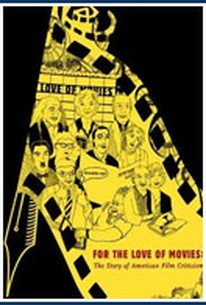 Actress Patricia Clarkson narrates this documentary dramatizing the unique history of American film criticism. In addition to eliciting the thoughts and opinions of such respected film critics as Roger Ebert, Kenneth Turan, Lisa Schwarzbaum, and A.O. Scott, the filmmakers also speak with internet-based critics like Harry Knowles and Karina Longworth, who offer a fresh perspective on the ongoing battle between upcoming on-liners and their print publication counterparts.

Critic Reviews for For the Love of Movies: The Story of American Film Criticism

For all its attempts to offer an expansive and exhaustive historical account, the [documentary] is riddled with glaring gaps and facile transitions.

A survey course on the history of film criticism will introduce even professional critics to names that they do not already know and will be an eye-opener for all who want to know more about the background and current status of movie reviewers.

Audience Reviews for For the Love of Movies: The Story of American Film Criticism

I saw this at the Cleveland International Film Fest. The director, Gerald Peary, was there to answers questions and meet people after the movie. I really liked the look into the history of film criticism. The doc highlights the earliest players, the major players, and the major events tied to people who wrote about movies through the twentieth century. At the advent of the computer, the doc falters in seeing the real diversity of people writing about movies online, or foreseeing a bit more of social networking's effect on how audiences choose what movie to see. This documentary originally screened at festivals early in 2009 and the director said it was nine years in the making. As most people are aware, the rate of change in technology is fast and accelerating, so I really can't hold it against Mr. Peary that he could not see the popularity of sites like Flixster, Facebook, and Twitter affecting how friends recommend movies to other friends. It simply is the case that the last chapter of the movie on the apparent end of print journalism and the explosion of online reviews with anyone thinking they can be a film critic has already become quite dated. I enjoyed the interviews with several famous film critics. I appreciated being able to put a face and voice with many of the names. I would have liked to see the interviews structured better with the through line of the doc's story. The graphics could have been better and the editing lagged especially between chapters. Overall it was a worthwhile picture about a topic I love.

For the Love of Movies: The Story of American Film Criticism Quotes