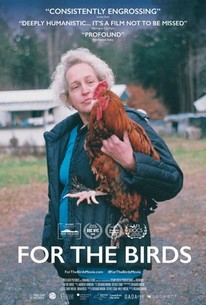 For the Birds Videos

In Richard Miron's surprising and empathetic ​For the Birds​, we follow an unusual woman named Kathy who lives with 200 pet chickens, ducks, geese and turkeys. What starts as a story seemingly about Kathy's battle with local animal advocacy groups slowly transforms into an intimate drama about her relationship with her husband Gary, and the toll the birds have taken on their marriage and her well-being. Filmed over the course of five years, this sensitive tale of one woman's world breaking down--poignant and absorbing in equal measure--is ultimately one of hope about the possibility of regaining one's life.

News & Interviews for For the Birds

New on Netflix in September 2019: New Movies, TV Shows, Netflix Original Series
Godzilla: King of the Monsters Is Exactly What It Promises

View All For the Birds News

Critic Reviews for For the Birds

While the documentary evolves in its scope, Miron's feature debut always remains evenhanded. "For the Birds" is kind to its subject, while recognizing the harm she's inadvertently doing.

Miron avoids easy conclusions about what drives Kathy, and he stays with her long enough for her story to surprise.

Its kind lens is a necessary antidote to the shame and vitriol that often accompanies television's depictions of hoarders, granting all parties dignity.

Carmen Paddock
One Room With A View

[Morphs] from a dark picture of untreated mental illness and a crumbling marriage to something more meaningful: a picture of one woman slowly taking her life back.

[For the Birds] is an intimate portrait which invites viewers to engage with someone they might otherwise avoid and acknowledge as she must that love and care are not always the same thing.

Cute, bittersweet...but doesn't get deep enough into the subject to give us a "why" this woman hoards birds.

This doc will evoke long discussions about the mental state of this champion protector of birds. Is she a hoarder, or a saint?

For the Birds is admittedly not groundbreaking. But it illuminates something we might not think about very much, which is what is actually going on in the mind of a hoarder, and how the pathology of such a person ramifies on other people.

The film marks one of those exciting moments when you realize that for as an unbelievable true story unfolds before your eyes, it's as remarkable, if not more so, that the right film crew was around to do it justice.

I particularly loved how Miron, whose first feature this is, surprises us time and again with new plot developments.

There are no featured reviews for For the Birds at this time.

For the Birds Quotes