For Queen and Country1989 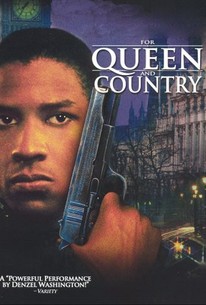 For Queen and Country Photos

With a cruel, keen edge, this taut social drama slices deeply into Thatcher's England to expose a grim underbelly of racism, cynicism and despair. Reuben James is a black paratrooper who has spent the last nine years serving in the British army and who finally gets discharged to return to his home in South London. There he discovers that the residents have been ravaged by the poverty of the decade and many have turned to crime to survive, while others do their best in the midst of crushing hopelessness to find order and meaning. He too fights the same battles as he struggles to find work. He is disillusioned to discover that to racist employers, his sterling service record is almost worthless. The poor veteran suffers a final blow when he learns that because he was born on the common-wealth island of St. Lucia, and because the laws have suddenly changed, he is no longer considered a British citizen. Now he must quickly make a decision about the rest of his life. Meanwhile, back in the neighborhood, tempers fray, frustration mounts and violence ensues.

Critic Reviews for For Queen and Country

Effective radical agitprop, relentless in its anger, this film is more outspoken about contemporary racism in England than any other feature that comes to mind.

This is a serious subject, and worthy of a serious journalistic report. That is not, however, what For Queen and Country is.

The choice of Washington doesn't help: he isn't bad in the part, but his accent strays absurdly. More worrying is the often corny plotting, the by now tired-looking exploitation of Broadwater violence, and a preposterous shootout ending.

In a terrifically subtle and powerful performance, Mr. Washington is true to the modest, struggling man he plays. His expression registers restrained anger and much confusion.

For Queen & Country is suspense-free, a laboriously paced look at the poor man's impotence in an unjust society.

Washington creates the character as a convincing, sympathetic person, and he deserves more than to have the character thrown away on a phoned-in plot.

A jolly caper it isn't, but for gritty thrills and powerful drama, it delivers.

Denzel Washington gives a forceful performance as the black protagonist, but the story sinks into mere cops-and-robbers melodrama after a while.

Artfully directed and acted, For Queen & Country errs by overstating its case.

Aside from the bizarre sight of Denzel Washington sporting a cockney British accent, there's not much worth recommending about For Queen and Country.

Audience Reviews for For Queen and Country

Denzel walks around, denzel talks to some guys, denzel drinks some liquor, denzel dies. and he does all this with a british accent and australian slang.

For Queen and Country Quotes