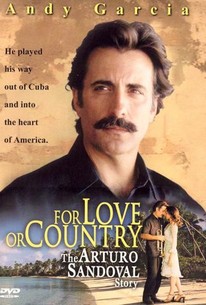 World-class trumpeter Arturo Sandoval was a shining light in Cuba's exciting jazz scene and championed by jazz legend Dizzy Gillespie as one of the greatest musicians he'd ever heard. But as Sandoval's fame grew, so did his discomfort with Fidel Castro and Cuba's Communist leadership. Though Sandoval longed to leave Cuba and emigrate to the United States, where he could enjoy political freedom and make the most of his gifts as a musician, one thing held him back -- his love for his wife and children, whom he could not bear to leave behind. For Love or Country: The Arturo Sandoval Story is a made-for-cable drama based on the true story of Sandoval's career, his eventual flight to the United States with his family, and the unexpected roadblocks that nearly prevented him from becoming a naturalized American citizen. Andy Garcia stars as Arturo Sandoval, with Mia Maestro co-starring as his wife Marianela; Gloria Estefan, Tomas Milan, and Miriam Colon highlight the supporting cast. The biographical drama was produced for the HBO premium cable network and first aired on October 18, 2000.

Critic Reviews for For Love or Country

There are no critic reviews yet for For Love or Country. Keep checking Rotten Tomatoes for updates!

Audience Reviews for For Love or Country

For Love or Country Quotes