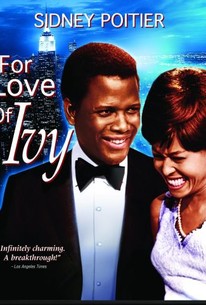 Jack Parks (Sidney Poitier) is a drifting gambler who runs a floating crap game from the back of a truck. Ivy Moore (Abby Lincoln) is the maid for the Austin family who is being driven crazy by her employers, in particular the mother Gena (Lauri Peters). Jack is approached by the two teenage Austin children (Beau Bridges and Nan Martin), who try to play Cupid and bring Ivy together with the life long bachelor. The two kids dearly love Ivy and hope that a romance will keep her in the family's employment. Carol O'Conner plays the role of their father. Ivy and Jack, although from very different backgrounds, manage to hit it off just fine and contemplate marriage in this light romantic comedy. The story comes from Poitier, with the screenplay by Robert Alan Aurthur. Soundtrack provided by Quincy Jones.

Critic Reviews for For Love of Ivy

For Love of Ivy is a warm and delightful comedy. It isn't exactly a masterpiece, but it is well made and I enjoyed it.

It's an equal opportunity offender: supporting both white and black bourgeois dreams.

...Poitier's always a pleasure to watch, even when the story surrounding him isn't exactly captivating.

Audience Reviews for For Love of Ivy

There are no featured audience reviews yet. Click the link below to see what others say about For Love of Ivy!

For Love of Ivy Quotes