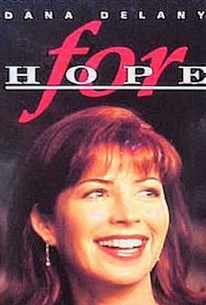 Comic actor Bob Saget served as producer and director of this made-for-TV film, inspired by the true story of Saget's sister Gay, who died in 1994 at the age of 47. Despite the pressures of single motherhood, schoolteacher Hope Altman (Dana Delany) seems to have her life in order until she is diagnosed with scleroderma, a disfiguring skin disease that causes her body's connective tissues to stiffen and atrophy, and will eventually paralyze her while eating away at her vital organs. There is no cure for scleroderma, and the survival rate is tragically low--and worse, neither the medical community nor the general public has a firm grasp on understanding the disease and its many victims (500,000, mostly female, in the United States alone). The film chronicles the manner in which Hope and her family handle the nightmarish situation, often with what Saget described as "irreverence and dark humor" (At one point, Hope's brother Alan--a comedy writer--quips that scleroderma sounds like "a deli entrée"). Sharon Monsky, who at the time ran one of the most prominent organizations for those suffering from scleroderma, appears briefly as herself. For Hope originally aired over the ABC network on November 17, 1996.

Sharon Monsky
as Herself

Peter LaCroix
as Dr. One

B.J. Harrison
as Shawniqua
View All

Critic Reviews for For Hope

There are no critic reviews yet for For Hope. Keep checking Rotten Tomatoes for updates!

There are no featured reviews for For Hope at this time.