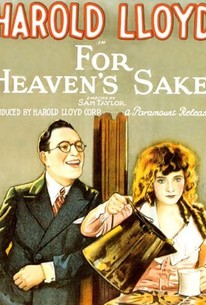 Harold Lloyd plays a wealthy young spendthrift who is upset that his name is being used to bring parishioners into a storefront mission in the poorer part of town. He heads to the mission to have it out with the minister, only to fall in love with minister's daughter Jobyna Ralston. Realizing that the use of his name as an endorsement was an honest error on Ralston's part, Harold decides to help the girl's father attract worshippers and hymn-shouters. He goads a bunch of thugs and pluguglies into the mission, then makes certain that they stay--and secures their undying loyalty--by saving them from being arrested. Harold and Jobyna decide to get married, whereupon Harold's wealthy chums, dismayed that he is marrying beneath his station, kidnap the poor fellow to prevent him from making a "mistake". Harold is rescued by his tough-guy slum pals, but not before they've gotten themselves drunk and commandeered a double-decker bus. The climactic chase is as hilarious and exciting a piece of celluloid as has ever been produced, but it is merely the capper to an uninterrupted stream of brilliant sight gags. Long underrated, For Heaven's Sake is one of the cleverest and most consistently entertaining of all of Harold Lloyd's silent vehicles.

Harold Lloyd
as The Uptown Boy

Jobyna Ralston
as The Downtown Girl

Blanche Payson
as Lady on the street

Oscar Smith
as James, the chauffeur

Leo Willis
as Mug who gets kicked

Jim Mason
as The Gangster
View All

Critic Reviews for For Heaven's Sake

Bucketfuls of belly laughs to be had, and I nearly gagged when Lloyd munched on a powder puff soaked in cologne believing it to be a cake baked by his sweetie.

...n unabashed "gag film" in which the storyline is secondary a series of stunts and gags that keep coming at a rapid pace.

The film still rocks because of its great sight gags and chases.

There are no featured reviews for For Heaven's Sake at this time.