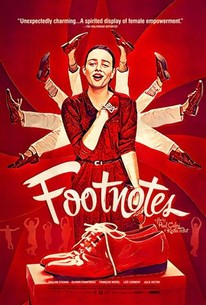 Inspired by the films of Jacques Demy and Stanley Donen, FOOTNOTES is a whimsical and original musical comedy about Julie, a young woman struggling to make ends meet in France's radically changing economy. Living out of a backpack, Julie spends her days jumping from job to job until she's finally offered a temporary stockroom position at a women's luxury shoe factory. After making friends with the boss's spunky receptionist Sophie and the ever-charming factory truck driver Samy, Julie thinks the hard times are behind her. But Julie's dreams of stability collapse when management threatens to close down the factory. As her intrepid group of female colleagues get together to go on strike, Samy and the other truck drivers decide to side with the company's scheming CEO. Julie must choose whether to keep a low profile (and a shot at permanent employment) or to resist and fight back on the picket line.

War for the Planet of the Apes Is Certified Fresh

The performances, songs, and choreography are all charmingly low-key, giving the film a handmade quality that suggests pride in a job well done.

Yes, the whole thing is fantastical, a daydream of people triumphing over profits via brilliant PR, and love making a case for itself in the face of everything. But it's just believable enough to make at least some of us play along.

While Footnotes works up a certain provisional charm at moments, it's too determinedly low key as a whole to make a really memorable impression.

This feather-light French confection, written and directed by Paul Calori and Kostia Testut, addresses its dignity-of-work thesis with sweetness and heart.

It's a sometimes impressive effort, but the homage often suggests a photocopy of a photocopy; the skeleton of the inspirational source remains, but the details are obscured.

Footnotes isn't perfect, but at least nobody lectured me about jazz.

Unkempt, and all the more charming for it, Footnotes may not slide into off-key territory, but is quickly diminished when considering the footsteps of the icons it tries to ape.

Modest tonic, a bright and agreeable musical drawing on the boldly colored palette of countryman Jacques Demy and American filmmakers like Stanley Donen.

There are so many other, better ways you could spend Footnotes' seventy-eight minutes.

Captivating, enchanting, and whimsical, Footnotes is one of the year's most delightful surprises.

Homage of movie musicals of years past has a certain charm but fails to live up to its illustrious predecessors.

France's often delightful, lefty response to La La Land, has workers uniting in song and dance to protest a downsizing of their luxury shoe factory. Sort of a low rent Pajama Game with a book by Karl Marx and lyrics by Jimmy Choo.

There are no featured reviews for Footnotes (Sur quel pied danser) at this time.