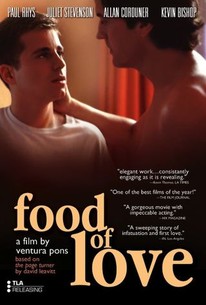 Adapted from David Leavitt's book The Page Turner, Food of Love tells the story of a cross-generational romance between two men. Paul (Kevin Bishop), a sexually repressed teenager, is an aspiring pianist who gets an opportunity to work as a page turner for Richard Kennington (Paul Rhys), a renowned pianist who also happens to be Paul's idol. A flirtation ensues between the two men after a concert one night, but further possibilities are thwarted by the meddling of Paul's neurotic mother Pamela (Juliet Stevenson). When Paul and Richard meet again six months later in Barcelona, they begin where they left off, tumbling headlong into a passionate affair despite the continued intrusion of Pamela, who believes that Richard is flirting with her. The affair is further complicated by the presence of Mansourian (Allan Corduner), Richard's manager and lover, who is suspicious of the relationship between Richard and Paul. Unable to deal with the situation, Richard flees to New York, and when he and his young lover finally meet again, Paul is a Julliard student engaged in an affair with yet another middle-aged man. Food of Love was screened at the 2002 Philadelphia Gay and Lesbian International Film Festival.

Brenda Roque
as Student No. 1

Jack McKusay
as Boyfriend
View All

Critic Reviews for Food of Love

This is mild-mannered, been-there material given a pedestrian spin by a director who needed a touch of the flamboyant, the outrageous.

The performances and tight direction from Ventura Pons keep the film from descending into cheap melodrama.

Plays like a glossy melodrama that occasionally verges on camp.

It's the extra layer that makes this one, the movie's understanding of how disillusion and inner compromise can gradually separate a young artist from his divine spark.

I suspect that there are more interesting ways of dealing with the subject.

An elegant work, Food of Love is as consistently engaging as it is revealing.

An average coming-of-age tale elevated by the wholesome twist of a pesky mother interfering during her son's discovery of his homosexuality.

Young star Kevin Bishop plays the confused Paul with enough soul to sustain a movie that sometimes comes on like an ersatz training manual for parents of gay kids.

Despite Juliet Stevenon's attempt to bring cohesion to Pamela's emotional roller coaster life, it is not enough to give the film the substance it so desperately needs.

The principals in this cast are all fine, but Bishop and Stevenson are standouts.

Based on a David Leavitt story, the film shares that writer's usual blend of observant cleverness, too-facile coincidence and slightly noxious preciousness.

Audience Reviews for Food of Love

This movie had to be the dullest piece-of-crap I've ever seen. Wait-- that would be Gods and Generals. But this would be high up there on my list of crappy movies. It has nothing to do with it being gay-themed (I loved Brokeback Mountain and Touch of Pink). It's just that the script is a thin shroud for a softcore gay porn flick. It is truly horrendous and there's no character development at all. The lead is a page turner for a pianist or something. That's it. No cinematography to redeem it (good cinematography can actually make a really shitty movie good enough for me to like), and there's no great performances by females (which is usually the case and only saving grace for actresses in gay men movies). Stay away from this atrocious production. Don't even watch it out of morbid curiosity.