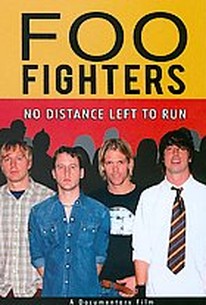 Long before the Foo Fighters became a modern rock fixture, frontman Dave Grohl had been the driving force behind many a hardcore outfit. This in-depth documentary traces the drummer's career from D.C. (where he played with the punk act Scream) through to his hallowed days with Nirvana, featuring incredibly rare performance footage and interviews with his colleagues, bandmates, and admirers. NO DISTANCE LEFT TO RUN also includes an exclusive selection of Foo Fighters bootlegs, as well as a variety of never-before-seen photos of Grohl through the ages.

Critic Reviews for Foo Fighters - No Distance Left To Run

There are no critic reviews yet for Foo Fighters - No Distance Left To Run. Keep checking Rotten Tomatoes for updates!

There are no featured reviews for Foo Fighters - No Distance Left To Run at this time.