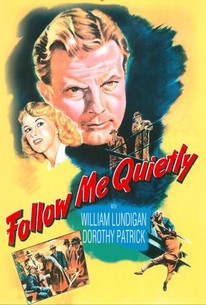 Though RKO Radio had trouble turning out successful "A" pictures in the late 1940s-early 1950s, the studio's "B" productions were the best in the business. One of the best was 1949's strange, obsessive film noir Follow Me Quietly, which manages to pack more excitement and sheer entertainment value in 59 minutes than most big-budgeters can accomplish in twice that time. Detective Harry Grant (William Lundigan) is assigned to track down "The Judge," an unknown serial killer. With only a handful of sketchy clues, Grant constructs a faceless dummy to help his men conduct their investigation. The film's "money scene" finds the murderer quietly taking the dummy's place, right under the noses of the entire police force! Logic is not the film's strong suit, but Follow Me Quietly builds carefully to a dynamite finale filmed on location at an LA refinery (shades of White Heat!)

Edwin Max
as The Judge

Nolan Leary
as Larson
View All

Pallid polemics don't interfere with the bracing virtues of Follow Me Quietly, a throwaway artifact swarming with the gratuitous pleasures of visual storytelling.

This was clearly timed to play the bottom of a double bill, but it has better production values than most B-movies and Fleischer devotes much greater care to the direction.

Effectively filmed in a semi-documentary style.

There are no featured audience reviews yet. Click the link below to see what others say about Follow Me Quietly!