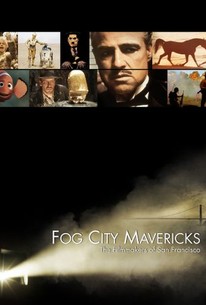 While Los Angeles has been the capital of major studio filmmaking in America since the early ears of the 20th Century, in the northern part of California, San Francisco has become home to a different breed of filmmaker -- artists who treasure their independence and carefully guard their creative vision, even while working in the highest echelons of the commercial movie business. Francis Ford Coppola and George Lucas are just two of the best-known directors to emerge from the San Francisco film community, and Fog City Mavericks is a documentary which pays homage to a number of important filmmakers from the City by the Bay. In addition to Coppola and Lucas, Fog City Mavericks profiles directors Clint Eastwood, Carroll Ballard, Philip Kaufman and Chris Columbus, pioneering independent auteur John Korty, experimental filmmaker Bruce Conner, producer Saul Zaentz, editor and sound designer Walter Murch, cinematographer and director Caleb Deschanel, digital animation moguls Brad Bird, Pete Docter, John Lasseter and Andrew Stanton, and actor Robin Williams, and many more. While examining these individuals, the film also embraces the whole of the San Francisco film scene, and explains why these artists remain so loyal to their hometown. Fittingly, Fog City Mavericks received its world premiere at the 2007 San Francisco International Film Festival.

Peter Coyote
as Narrator
View All

This work reminds its lucky viewers why they fell in love with movie-going to begin with: the creative minds behind the frames that paint moving images to feed our imaginations.

When "maverick" is thrown around this cheaply, it's just a step for somebody to mount an auteurist case for Chris Columbus.

Watching these well-known stories retold with fresh, innovative angles creates a very special, educational experience - absolute pure gold to anyone who has ever followed these careers with unabashed admiration.

There are no featured audience reviews yet. Click the link below to see what others say about Fog City Mavericks!