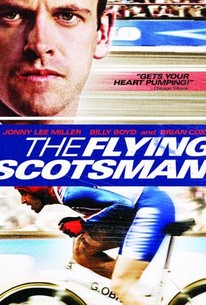 Critics Consensus: The Flying Scotsman's too-brisk pacing reduces the scale of cyclist Graham Obree's accomplishments while not uncovering what makes him tick.

Critics Consensus: The Flying Scotsman's too-brisk pacing reduces the scale of cyclist Graham Obree's accomplishments while not uncovering what makes him tick.

Critic Consensus: The Flying Scotsman's too-brisk pacing reduces the scale of cyclist Graham Obree's accomplishments while not uncovering what makes him tick.

"The Flying Scotsman" is the true story of celebrated Scottish cyclist Graeme Obree, a former world champion, who broke the world one-hour record on a bike of his own design, made partly out of sections of a washing machine. The film follows his life's victories as well as his battles with mental health problems.

George Drennen
as Father on Bike

Brennan Caitlin
as Daughter on Bike

News & Interviews for The Flying Scotsman

View All The Flying Scotsman News

Critic Reviews for The Flying Scotsman

It's an underdog story with teeth.

It is a straightforward biography but it treads so gingerly around his mental troubles that you feel something is missing.

It moves, but it never flies.

What cripples the film's success as a sporting movie is the fact that its director, Douglas Mackinnon, struggles to find a way of making the climactic cycle races interesting.

Cycling drama doesn't quite race to the finish.

Business-as-usual for a sports movie.

Competently made and reasonably interesting, but The Flying Scotsman lacks the kind of exhilaration that inspirational true-life sport films generally need to carry them to cinematic gold

Why pay to see someone cycling when they do it on the pavement for nothing?

It's stirring stuff from start to finish which will make our friends from north of the border proud to be Scottish. Go See.

The underdog plot has been done umpteen times before, of course, but there's something Miller brings to the screen that transcends the familiarity.

Audience Reviews for The Flying Scotsman

Nothing special. And, as an American, my hand was constantly on the rewind button so I could understand all the Scotish accents. Noot m'eh fehvrut moovie, bu' it wus a gud sturie.

I normally avoid sports films because they're very predictable and essentially all the same; let's face it, if they'd f**ked it up, nobody would've made a film about them. The story of Graeme Obree however, is quite an interesting one. A former bicycle courier from a working class Scottish town, Obree went on to become double world champion on a bike he made himself out of old washing machine parts. He did this despite suffering from an intense depression that caused him to attempt suicide and the interference of the sport's governing body who repeatedly changed the rules to specifically try and stop him competing because his DIY attitude threatened the big money manufacturing concerns within the sport. As such it is a facinating combination of the usual triumph of the human spirit sports movie, human psychological drama and battle of the individual against overwhelming odds. As such it is much more interesting than your average sports film and rather better than the similar biopic of Ian Curtis, Control.

trying to be both a sports movie and biopic and failing at both. Some interesting side charactors (Brian Cox, wonderful as usual) make this watchable, but the film takes way too much for granted; never fully investigating the bi-polar disorder that should have been at the center of the film - so in the end you feel like a passive viewer to someone's life, and not invested in its outcome. The direction did have some nice touches of levity - too bad it couldn't find a coherent voice in the screenplay.

Underwhelming by the numbers biopic which sketches over the protagonists mental illness unconvincingly.