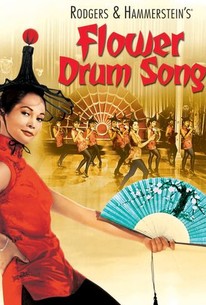 The only Rodgers and Hammerstein cinemadaptation to be produced by Universal Pictures, Flower Drum Song was, alas, also the only Rogers and Hammerstein film to lose money at the box office. It looks far better now than it did back in 1961, if only because of the paucity of musical films in the 1990s. Essentially a comedy about the culture clash between old-world Chinese and assimilated Chinese-Americans, the film begins when Mei Li (Miyoshi Umeki) and her grandfather (Kam Tong) smuggle themselves into San Francisco. It seems that Mei Li has arrived to honor an arranged marriage between herself and Runyonesque nightclub owner Sammy Fong (the incomparable Jack Soo). This might prove delicate, since Sammy is in love with flashy cabaret entertainer Linda Low (Nancy Kwan). Meanwhile, Linda is romancing Wang Ta (James Shigeta), the son of a wealthy Chinatown merchant (Benson Fong). Soon, however, Mei Li and Wang Ta have fallen in love.......It's a complex plot, to be sure, but comedy and music manage to predominate. The songs include "I Enjoy Being a Girl" (a tour de force for the special effects department, and for Nancy Kwan), "A Hundred Million Miracles," "The Other Generation," "Love Look Away," "I Am Going to Like It Here," "Don't Marry Me," "You Are Beautiful," "Grant Avenue" and "Chop Suey." Flower Drum Song is attractively produced and consummately acted; while no classic along the lines of King and I or Sound of Music, it deserves a second look.

Since colorfulness and pleasant music were the strong points in Flower Drum Song... when it bloomed on the Broadway stage, it is notable that the film version stresses those qualities and does well enough by others.

The stage show was the usual product of the R. & H. collaboration... In the movie nothing of value has been eliminated, but nothing of interest has been added.

Flower Drum Song has been overwhelmed by the sheer opulence and glamour with which Ross Hunter has translated it to the screen. As a film, it emerges a curiously unaffecting, unstable and rather undistinguished experience.

Performances, from top to bottom, are nothing short of superb.

Like most of the Rodgers-and-Hammerstcin musicals, this one probably is headed for success at the movie box-office, but in honest warmth and melodic appeal it compares weakly with its predecessors.

This screen version of Rodgers and Hammerstein's Broadway success about life in San Francisco's Chinatown was woefully patronising and under-directed by Henry Koster.

Though not one of Oscar and Hammerstein best works, this Oscar-nominated musical about culture clash merits a viewing.

Lesser of Rodgers & Hammerstein musicals has some good songs, performances.

The smash Rodgers-Hammerstein Broadway hit was only adequately adapted in this overblown production.

Somehow, they wreck Rogers and Hammerstein, although R&H didn't do all that well with the original musical.

Plenty of great songs. My favorite is probably "Love Look Away," and it's tough to beat the appeal of a young Nancy Kwan in her absolute prime. Amazing to see Miyoshi Umeki in a romantic lead as well. I will miss her.