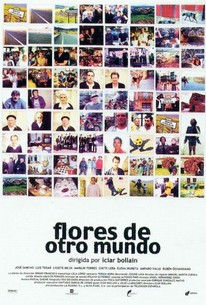 Based on a true story, Flores de Otro Mundo is a film about rural life in present-day Spain. A little village with no women and no future organizes a big bachelors' party to which all the single women of the neighborhood are invited. Patricia from the Dominican Republic who has no ID, Milady from Havana who is dying to travel all around the world and Basque Mariroso find themselves on the 'bus of hope' chartered by the village. What follows is a story of social integration and male/female relationships. Director Iciar Bollain is well-known for her career as a leading actress in over 15 films, particularly Victor Erice's El Sur, Manuel Gutierrez Aragon's Malaventura, and Ken Loach's Land and Freedom. Her first film, Hola, Estas sola? (1995), won several international awards. The film was screened in the International Critics' Week of the 1999 Cannes Film Festival.

There are no critic reviews yet for Flores de Otro Mundo. Keep checking Rotten Tomatoes for updates!

There are no featured reviews for Flores de Otro Mundo at this time.