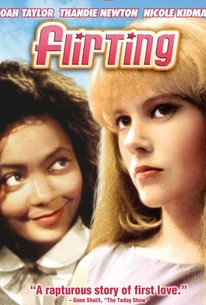 Critics Consensus: A terrific follow-up to The Year My Voice Broke, Flirting is a teen movie worth watching, thanks to emotionally engaging performances and an endearing script.

Critics Consensus: A terrific follow-up to The Year My Voice Broke, Flirting is a teen movie worth watching, thanks to emotionally engaging performances and an endearing script.

Critic Consensus: A terrific follow-up to The Year My Voice Broke, Flirting is a teen movie worth watching, thanks to emotionally engaging performances and an endearing script.

Australian filmmaker John Duigan followed up his captivating The Year My Voice Broke with Flirting. Noah Taylor repeats his "Danny" characterization from the earlier film, while Thandie Newton plays a Ugandan exchange student who attends an Australian girls boarding school. Billeted at a nearby boy's school, Danny finds himself falling in love with Newton, though he is frequently at a loss as to how to express himself. Flirting is the second in a proposed trilogy of John Duigan-directed films revolving around Danny's "awkward" years. Featured in the cast as one of Newton's schoolmates is Nicole Kidman.

Not only worthy of its fine predecessor, this tender, perceptive, and gorgeously acted memory piece may even surpass it in subtlety, feeling, and depth of characterization.

Miles ahead of the average teen film, Flirting is a most agreeable sequel to John Duigan's earlier pic The Year My Voice Broke.

Mr. Duigan avoids melodrama, which is all to the good. Yet his gift for the acutely observed commonplace detail is neither strong nor original enough to transform the movie into something comparable to so many similar, better films.

This kind of emotional precision -- that is, this ability to make the subtlest psychological distinctions -- is a rare gift, and Duigan gets full mileage out of it.

If Duigan maintains the dark yet humanistic humor that has graced both films, we should all be back for more.

Flirting is one of those rare movies with characters I cared about intensely. I didn't simply observe them on the screen, I got involved in their decisions and hoped they made the right ones.

As played out by the witty but shy Taylor and the softly radiant Thandie Newton, the romance rises far above the routine "teenagers-in-love" movie.

An absolute gem, and a treat not to be missed.

An intelligently written and marvelously acted coming-of-age tale set in rural Australia in the 1960s.

Animation is used here clearly to allow the story to be told with a certain amount of distance, yet the constant shift in tone and introduction of video elements keeps the film intensely unsettling.

Charming and entertaining, Flirting, have a captivating script, acting and a good direction that make the audience watch Duigan's movie from the beginning to his end. Fresh.

I didn't really get it. I didn't feel the adolescent pains.

A witty Australian drama. Interesting how Nicole Kidman is a supporting character and yet ended up on the cover of the DVD release. Interesting marketing ploy.

Sensitive teen drama at Sydney boarding school and Nicole Kidman is perfectly as a 16-year-old snooty school prefect (she was 24 years old when that movie was filmed).