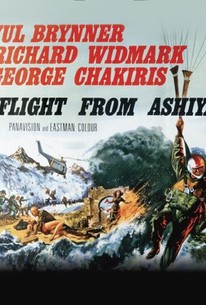 Elliott Arnold wrote the novel upon which he and Waldo Salt based their screenplay. When an American rescue team is sent near the coast of Japan during a typhoon, three men on the team must contend with their own past experiences. Each man's traumatic event is retold via flashback: Sgt. Mike Takshima (Yul Brynner) is still overcome with grief from the death the woman he loved (Daniele Gaubert), Sgt. John Gregg (George Chakiris) feels guilty for a past rescue mission gone tragically awry, and Col. Glenn Stevenson (Richard Widmark) suffers from the loss of his wife and child who died in a Japanese prison camp. It is Stevenson's problem which is the most significant as he professes hatred against the very people he is assigned to save. Suzy Parker and Shirley Knight are also featured in this adventure-drama from director Michael Anderson. Shot on location in Japan.

Critic Reviews for Flight from Ashiya

There are no critic reviews yet for Flight from Ashiya. Keep checking Rotten Tomatoes for updates!

Audience Reviews for Flight from Ashiya

There are no featured audience reviews yet. Click the link below to see what others say about Flight from Ashiya!