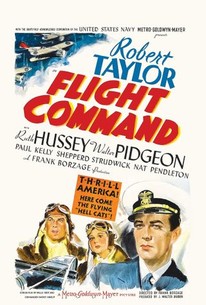 MGM had a tendency to overglamorize the sort of rough-hewn film fare that Warner Bros. offered to its public without adornments. Such was the case of Flight Command. Instead of Warners' streetwise James Cagney, the MGM film stars pretty-boy Robert Taylor as the obligatory hotshot cadet who chafes at the authority and discipline of a naval flight squadron. While Warners might have done without a romantic subplot, MGM contrives to have Taylor fall for the wife (Ruth Hussey) of squad commander Walter Pidgeon. And whereas Warners would have told this story compactly in 90 minutes, MGM lolls around for nearly two hours before Taylor's anticipated redemption and "make good" scene. MGM newcomer Red Skelton shows up in Flight Command for comedy relief, which turns out to be neither.

John Raitt
as Cadet
View All

The director Frank Borzage, and the main actors Robert Taylor, Ruth Hussey and Walter Pidgeon deserve to be praised. [Full review in Spanish]

There are no featured reviews for Flight Command at this time.