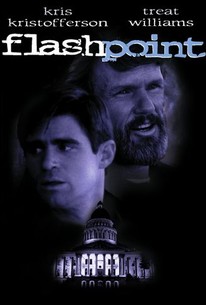 Bob Logan (Kris Kristofferson) and Ernie Wyatt (Treat Williams) are freewheeling U.S. border patrol officers in a tiny Texas town. Though they're "oil and water" in terms of personality, they're a dynamite team on the job. Coming across a million dollars in stolen money, their relationship threatens to unravel. Upright Wyatt is all for turning in the money, but Logan has other ideas. Soon, however, they're reunited against several common enemies, including a team of overzealous FBI agents. Flashpoint is based on a novel by George La Founteine.

Joaquín Martínez
as Pedroza
View All

There are a lot of nice touches spread throughout the movie.

There are no featured audience reviews yet. Click the link below to see what others say about Flashpoint!