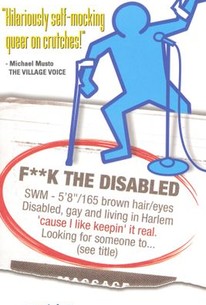 Not many stand-up comedians are openly gay, and fewer still are handicapped, but comic Greg Walloch just so happens to be both, and he's developed a growing cult following for his act, in which he pokes politically incorrect fun at his sexual preferences, his physical condition, and how society and the world around him reacts to both. F**k The Disabled (which is meant not as an epithet, but a polite request) is a documentary about Greg Walloch, in which he discusses his life and career while also sharing highlights from his nightclub act. F**k The Disabled also includes interviews with a number of Greg's admirers, including Stephen Baldwin, Jerry Stiller, Anne Meara, and Michael Musto.

Critic Reviews for F**k the Disabled

A gay white guy with cerebral palsy living in Harlem... sounds like the beginnings of a damn funny joke, doesn't it?

'Keeping It Real' is earnest but so laid back as film that it's finally pedestrian.

There are no featured reviews for F**k the Disabled at this time.