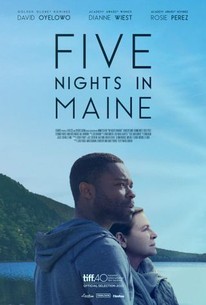 After his wife dies in a tragic car accident, Sherwin (David Oyelowo) is called to Maine by his estranged, terminally ill mother-in-law Lucinda (Academy Award-winner Dianne Wiest). Grappling with a lifetime of disagreements, Lucinda and Sherwin find themselves forced to cope with their failings and grief in a quiet journey of empathy, compassion and healing. Academy Award-nominee Rosie Perez and Teyonah Paris also star in this intimate directorial feature debut from filmmaker Maris Curran.

Graham Hults
as Cop
View All

Suicide Squad Shoots Itself in the Foot

The dialogue is minimalistic, and most of it courtesy of Lucinda's cruel taunts that cut like a knife. But even those moments are never fully explored.

Too much goes unsaid and too many issues are unresolved. The scenery is nice, but "Five Nights in Maine" just isn't worth the trip.

Curran guides the cast to commendable performances across the board, with Oyelowo and Wiest delivering controlled, nuanced work to fill in the script's generous negative space.

The dreary postmortem drama "Five Nights in Maine" is barely kept afloat by the gravitas of dueling leads David Oyelowo and Dianne Wiest.

A believable character study that may not draw crowds but certainly challenges its two lead actors.

We're left to guess how they feel at the beginning of the film and we don't learn much more by the end.

In creating such an elegant, poignant portrait of what it's like to mourn, she shows there's hope in being able to recognize beauty as it exists in the world, sometimes in the most unexpected places.

Despite [Oyelowo's] acting chops, it is difficult to feel sympathy for him since we do not have the opportunity to learn much about his character.

Ultimately, Five Nights in Maine is a film that's centered on a heavy and sad subject matter that ends up feeling empty.

While inherently fascinating in its analysis of grief ... it has difficulty finding its hook.

Jason Wilson
Under the Radar

Curran's deliberate pace captures the quietness of the setting of Five Nights in Maine, but the thinness of her script is what makes the film feel sluggish.

There are no featured audience reviews yet. Click the link below to see what others say about Five Nights in Maine!