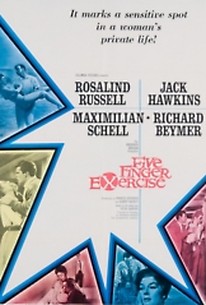 A distinguished cast highlights this film adaptation of a stage drama by Peter Shaffer. Stanley Harrington (Jack Hawkins) is a self-made businessman incapable of expressing his emotions or compromising with others; his wife Louise (Rosalind Russell) imagines herself an intellectual, though her intelligence is more of an affectation than a reality. Stanley and Louise hire Walter (Maximilian Schell), a teacher from Germany, as a tutor for their two teenage children, effeminate Philip (Richard Beymer) and high-strung Pamela (Annette Gorman). Walter tries to ingratiate himself with the family, with little success; when he tries to get to know Louise better, she imagines that he's fallen in love with her, and she's deeply hurt when he confesses that he instead sees her as a motherly figure. Walter is eventually driven to the brink of suicide, which forces the family to reconsider their attitudes toward Walter and each other. ~ Mark Deming, Rovi

Jeannine Riley
as Girl
View All

Rosalind Russell has never been more campy, a large statement, the normally able Jack Hawkins flounders around, and even Maximilian Schell was unable to be convincing.

There are no featured reviews for Five Finger Exercise at this time.