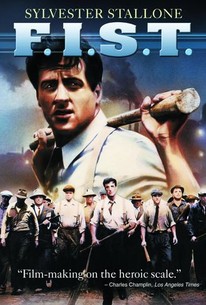 Johnny Kovak (Sylvester Stallone) is a trucker for a large and abusive company in the 1930s. He gets involved in union organizing for Mike Monahan (Richard Herd), a representative of the Federation of Insterstate Truckers (F.I.S.T., for short). When Mike is killed by company thugs, Johnny seeks out Vince Doyle (Kevin Conway), the local mob leader, to get some rough justice for his fallen colleague. Once his alliance with the Mob is sealed, Johnny swiftly rises to prominence in the union, becoming more and more ruthless as he goes. Having risen very high in worldly power, he now wonders if his sellout was worth it, even though he accomplished a few good things. This expensive film, in which Sylvester Stallone abandons the "type" he played in earlier films, was moderately well-received by critics but was a resounding failure at the box-office.

James Karen
as Andrews
View All

F.I.S.T. stands for nearly 2 1/2 hours of almost unmitigated boredom-a misfired would-be proletarian epic with Sylvester Stallone misplaying the Jimmy Hoffa part with a self-confidence that borders on the sublime.

F.I.S.T. is to the labor movement in the United States what All the King's Men was to an era in American politics.

Stallone's performance is a superb blend of stubborn-jawed gravity and ironic hamming.

F.I.S.T. is a big movie that benefits more from the accumulation of small, ordinary detail than from any particular wit or inspiration of vision. It's also played with great conviction by its huge cast.

The analysis lacks rigor and it's more interested in exploiting the previous hits of Sylvester Stallone than to delve deeper into any kind of social problem. [Full Review in Spanish]

F.I.S.T. is another in a long line of well-made films that excel in their particulars, even if they fall a little short as complete, complex pieces of cinema.

Stallone likes to depart from his customary muscle image from time to time. Often it fails, but sometimes he succeeds, as in this interesting (albeit somewhat flawed) drama of a Hoffa-like trade union leader.

You'll most likely enjoy F.I.S.T. as much as I did: enough to casually recommend the thing, but not all that loudly or excitedly.

It is well-trodden territory, with nothing exciting or enlightening offered.

When you read about the plot in this film and the run time it doesn't seem very appealing but I have to say I enjoyed it, The story isn't nothing new, A man starts a company needs help from the wrong people and traps himself in a corner but Stallones performance was brilliant maybe because he was fresh from his Oscar win from Rocky but he played a great part in keeping this movie from becoming stale, Won't be everyones cup of tea but I didn't think it would be mine and usually it's not but I got proved wrong yet again.

It's well made but lacking any narrative so it just lurches along.

Definetely a great Sylvester Stallone film. I don't know he just has that certain coolness factor about him. Rent this movie!!!