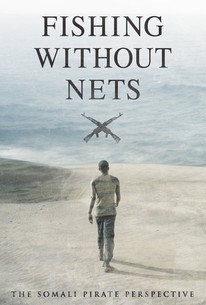 A desperate Somali father becomes a pirate in order to feed his family, but experience an intense crisis of conscience in this thought-provoking drama. Abdi knows that his wife and child could starve should he fail to find work fast. After falling in with a band of local pirates, he helps to capture a French oil tanker, and the ransom negotiations begin. Meanwhile, as the money is being transported, Abdi strikes up a tenuous friendship with a frightened hostage. Abdi's resolve is soon tested, however, when some of his fellow pirates display a shocking tendency toward violence. ~ Jason Buchanan, Rovi

Critic Reviews for Fishing Without Nets

Hodierne allows space for the tension to build, and the result is almost sickeningly suspenseful.

Executed with considerably more polish than the crime at its center, "Fishing Without Nets" turns the hijacking drama into a morally murky contemplation of deprivation and desperation.

Does little to expand on the subject.

At once busy and simplistic, the movie lacks A Hijacking's suspense and moral urgency and Captain Phillips' fleshed-out performances. What it offers instead is a slick sense of style and a surfeit of credible detail.

What's the problem? There are so many. For example: The film doesn't at all explain how or why the fish population was depleted or where all of the machine guns are coming from...

Fishing Without Nets provides a thorough examination at the motives of those involved, particularly the group's internal conflicts.

Do we really need another Somali pirates movie after Paul Greengrass's superb Captain Phillips? Turns out we do, and Cutter Hodierne's directorial debut Fishing Without Nets almost fits the bill.

Piracy on the high seas up close and personal.

[Hodierne] still manages to fall into the same trap as the other American films on this subject, focusing on individuals rather than group dynamics.

While [the movie] builds up to an ending that is superb and harrowing, the greater part of Fishing Without Nets feels like watching a slow drowning.

Jennifer Chang
Under the Radar
View All Critic Reviews (17)

Audience Reviews for Fishing Without Nets

There are no featured audience reviews yet. Click the link below to see what others say about Fishing Without Nets!