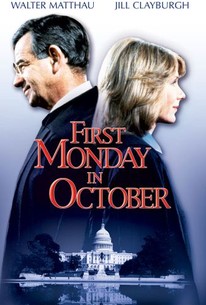 Based on a Broadway play by Jerome Lawrence and Robert E. Lee, conservative Ruth Loomis (Jill Clayburgh) becomes the first woman to be appointed to the United States Supreme Court, much to the dismay of liberal justice Dan Snow (Walter Matthau). Oddly enough, the appointment of Sandra Day O'Connor as the first woman justice of the Supreme Court occurred the same year that First Monday in October was released.

First Day in October puts up front the precise comic timing of Walter Matthau as an outspoken liberal justice of the Supreme Court.

There are no featured audience reviews yet. Click the link below to see what others say about First Monday in October!