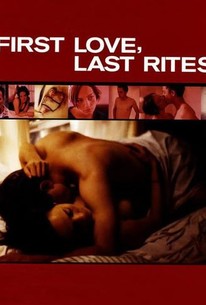 Jesse Peretz made his directorial debut with this intimate romantic drama adapted from a short story by Ian McEwan, switching McEwan's setting from an industrial English seaside town to the Louisiana bayou. Joey (Giovanni Ribisi) and Sissel (Natasha Gregson Wagner) live in a drab house on stilts, along with Sissel's lonely younger brother Adrian (Eli Marienthal). After Sissel introduces Joey to her father, Vietnam-vet Henry (Robert John Burke), the two men form a business catching eels. However, mistrust, anxieties, and arguments threaten the love Joey and Sissel share, and they begin to drift apart. Shown at the 1997 Toronto Film Festival.

Doesn't seem destined for box office success, but it's an impressive first film, and one I found myself thinking about for days afterward.

Watching the film is an experience more akin to being trapped in a dying relationship: lifeless, painful and unbearably dull.

There are no featured audience reviews yet. Click the link below to see what others say about First Love, Last Rites!