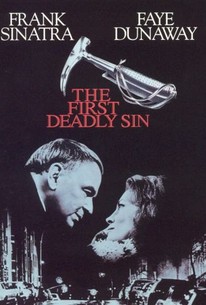 The First Deadly Sin was Frank Sinatra's final starring movie vehicle. Based on a novel by Lawrence Sanders, it casts Sinatra as Edward Delaney, a big-city detective on the verge of retirement. Beset with profound personal problems--including a gravely ill wife (Faye Dunaway)--Delaney nonetheless tackles the case of an axe murderer who seemingly strikes at random. Be on the lookout for an unbilled Bruce Willis.

Rosalyn Braverman
as Woman on Step

Leila Danette
as Woman on Step

Ramon Franco
as Boy #2 on Bus

Who would have thought, in all honesty, that Frank Sinatra had this performance still left in him?

The film is decent enough, and Sinatra is easy to believe and to take in the cliched role.

The First Deadly Sin reveals just how crucial citizens are in the solution to a crime.

3 stars for the storyline between Faye Dunaway's & Frank Sinatra's husband & wife characters.You could feel the love & tell he really cared about her & she about him.The storyline about the axe murderer & Sinatra's cop character chasing after him felt average & almost boring.At times I felt like skipping over them just to see the husband/wife scenes to see where it would lead.The ending wasn't what I was hoping for but I kinda figured out that it was gonna happen :(