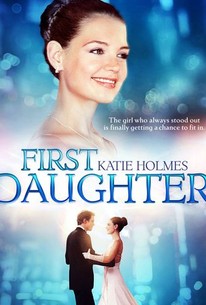 Critics Consensus: First Daughter is a bland and charmless fairy tale that fails to rise above the formula.

Critics Consensus: First Daughter is a bland and charmless fairy tale that fails to rise above the formula.

Critic Consensus: First Daughter is a bland and charmless fairy tale that fails to rise above the formula.

A very special student deals with exams, first love, and national security issues in this teen-oriented romantic comedy-drama. Samantha MacKenzie (Katie Holmes) is a seemingly ordinary college freshman with one important exception -- her father happens to be the President of the United States (Michael Keaton). Samantha, however, would prefer to be as inconspicuous as possible as she begins her studies at Redmond University, so she asks a favor of her father -- remove the two Secret Service agents who follow her everywhere, and allow her to fend for herself at school. The president agrees, but out of concern for her safety, he sends in a young undercover agent, James (Marc Blucas), who will pose as the Resident Advisor at her dorm to keep an eye on her. Samantha and James strike up a fast friendship that grows into a romance, but when Samantha discovers the truth about James, she wonders if his love for her is real or just part of his cover. First Daughter was directed by actor-turned-director Forest Whitaker.

Marilyn McIntyre
as Teacher at Party

Natalie Core
as Lady With Camera

Tim Liles
as Reporter on Street

Joan Rivers
as Herself

Melissa Rivers
as Herself

Bobbi Page
as Singer at White House
View All

The President's little girl gets a pity party for the second time this election year.

This stunning lack of inspiration is reflected in a script that continually hints at how teenagers have become disenchanted with politics without ever following it up.

...just has a really cheesy look.

First Daughter presents such a saccharine-sweet, insufferably boring portrait of a conservative president and his family, it could kill with kindness.

Perhaps the only redeeming factor is that both the President and the First Lady are devoted to their daughter. Otherwise, this film should be impeached.

Sweet but unremarkable, First Daughter is never quite as cute as its star.

Holmes' wholesome charm keeps the movie afloat, but only just.

If you must see one of the two Presidential daughter movies - this is the one to see. But like Chasing Liberty, it never delivers on the potential of the premise.

Don't really like Katie Holmes as an actress but Marc Blucas was incredibly gorgeous. Made me give the film a full star. Otherwise, it's just a crappy remake of Chasing Liberty which in my opinion was miles better than this film.

She sucked in this movie. I hated the ending...[disgusted]