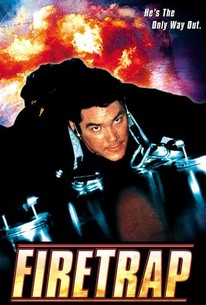 A criminal is forced to become a hero in this action drama. Max Hopper (Dean Cain) is a successful burglar who has decided it's time to leave his life of crime behind him. But Hopper is lured into pulling one last heist when he learns about a valuable new computer chip being created by a leading-edge digital hardware firm. Realizing the prototype chip could be sold for a fortune, Hopper comes up with a clever plan to get past the building's security team by posing as a fireman. However, his scheme becomes unexpectedly perilous when a disgruntled employee really does set the building on fire, forcing Hopper to become a real firefighter to save his life, as well as those of the others trapped in the building. Firetrap also stars Richard Tyson, Mel Harris, Lori Petty, and Steven Williams.

Chris Kriesa
as Hughes
View All

There are no critic reviews yet for Firetrap. Keep checking Rotten Tomatoes for updates!

There are no featured reviews for Firetrap at this time.