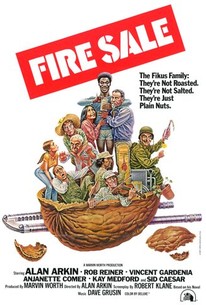 Alan Arkin directed and starred in this anarchic comedy. Benny Fikus (Vincent Gardenia) is the owner of a department store that's on its last legs, with his nebbishy son Russell (Rob Reiner) serving as his second-in-command. Benny's bother Ezra (Arkin) used to work with him at the store, but he quit to coach basketball in the midst of a long losing streak. Ezra's wife Marion (Anjanette Comer) desperately wants a child, and Ezra needs a new star player, so he thinks he's helping both of them when he adopts a black teenager (Byron Stewart) who shoots mean hoop. Benny, looking for a way out of the store's irrevocable financial slump, wants to burn the place down for the insurance money, but rather than hire an arsonist, he tries to convince his brother-in-law, Zabbar (Sid Caesar), that the store is actually a Nazi stronghold so Zabbar that will do the deed on his own. The supporting cast also includes Sally K. Marr, whose son was controversial comedian Lenny Bruce. ~ Mark Deming, Rovi

Marvin Worth
as Milton

Fire Sale is comedy, but with so many errors it's hard to know where to begin.

There are no featured reviews for Fire Sale at this time.