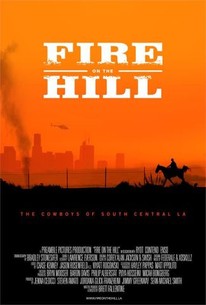 Fire on the Hill Photos

Five miles south of downtown Los Angeles is a place that was, until recent years, known as the murder capital of the world. For most, South Central LA is synonymous with gang violence, drug trafficking, and high amounts of crime. Yet for much of the twentieth century South Central LA was an agricultural boomtown filled with ranchers, farmers, and equestrians alike. Since the city's establishment, Compton and the surrounding neighborhoods have always had a culture of Black Cowboys. Once common to the dusty dirt roads, this culture has all but disappeared now in a wash of land-hungry developers, apathetic politicians, and relentless gang activity. Fire on the Hill tells the story of one of the last strongholds that the Cowboys have; a horse stable known as the Hill that was mysteriously set on fire in 2012. This is the story of three of those Cowboys and their fight to live out their vision of the West.

Critic Reviews for Fire on the Hill

There are these three really human stories pulling us along. I was just knocked out.

Though writer-director Fallentine is intrigued with bygone ways, his film isn't awash in nostalgia; the elegiac feeling is pierced with glimpses of gritty social realities and the quirks of personal drive.

Fire on the Hill disrupts our understanding of the area with an eye-opening look at an intriguing, underrepresented part of the city - the Compton Cowboys.

There are no featured reviews for Fire on the Hill at this time.

Fire on the Hill Quotes