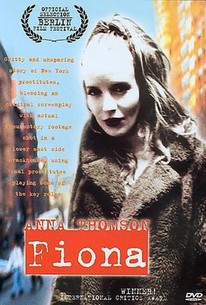 The director of Sue continues his exploration of the theme of lonely women lost in the big city with Fiona, which goes one step further and exposes the wasted lives of whores and junkies in New York. Fiona (Anna Thomson) was abandoned by her mother when she was six months old. She grew up in foster homes where she was abused and finally became a prostitute. She lives her life according to her own rules, without any qualms. After a fiasco with three cops in a restaurant, she hides out in a derelict building where drug addicts squat. By now she is thirty-one years old. She meets another woman, Anita (Felicia Maguire), who carries the scars of her life on the streets. Anita is old enough to be Fiona's mother, and maybe she is. They go to bed together despite one moment of vague reminiscence on the part of Anita, who seems to recognize the necklace Fiona is wearing. Fiona decides to leave New York and make a fresh start elsewhere, but she is caught stealing a bag of cookies and someone begins shooting at her. There is no escape in the films of Kollek for women who are doomed to fall further and further to the abyss. Fiona was screened as part of the Panorama section of the 49th International Berlin Film Festival, 1999.

Lisa Sauber
as Juicy
View All

There are no critic reviews yet for Fiona. Keep checking Rotten Tomatoes for updates!

There are no featured audience reviews yet. Click the link below to see what others say about Fiona!