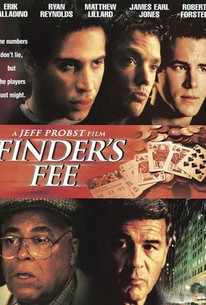 A first feature from the man best known as the host of the hugely successful reality-TV series Survivor, Jeff Probst's twisty thriller is centered around the world of card-playing and con men. A street artist, Tepper (Erik Palladino), finds a wallet outside his apartment building one rainy New York night and phones a number he finds inside. He finds out it belongs to Avery Phillips (James Earl Jones) but notices it contains a lottery ticket worth six million dollars and foolishly tells his garrulous pal Fishman (Matthew Lillard). On the night of their poker game, two more men enter the equation: Quigley (Ryan Reynolds), a divorced sad-sack, and Bolan (Dash Mihok). After Tepper phones him, Avery decides to sit in on their game, unaware that Tepper has his winning lottery ticket. As their game progresses, Tepper's sense of ethics is put to the test, as are the loyalties of the men at the game. Robert Forster co-stars as a street cop thrown into the proceedings, and Carly Pope appears as Tepper's longtime girlfriend Carla.

Robert Forster
as Off. Campbell

Probst has crafted a nifty little story for his film debut, and I'm actually looking forward to see what he'll do next. Who knew?

There are no featured audience reviews yet. Click the link below to see what others say about Finder's Fee!