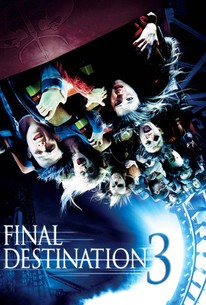 Critics Consensus: Final Destination 3 is more of the same: gory and pointless, with nowhere new to go.

Critics Consensus: Final Destination 3 is more of the same: gory and pointless, with nowhere new to go.

Critic Consensus: Final Destination 3 is more of the same: gory and pointless, with nowhere new to go.

Death once again shows he's determined to get what he wants in this teen-centric thriller. Wendy (Mary Elizabeth Winstead) is a high school student hanging out with her friends at an amusement park one night when they decide to ride on the roller coaster. Wendy, however, has a premonition that something horrible will happen, and finds a way to save herself shortly before the ride goes off the rails, killing most of its passengers, including her boyfriend, Jason (Jesse Moss), and best friend, Carrie (Gina Holden). However, while Wendy may have survived the night at the park, she soon discovers that a malevolent spirit is following her and her classmates as they begin dying in strange and horrible ways. Wendy learns that a series of snapshots taken that evening give clues to the mayhem that followed her pals, and she teams up with Kevin (Ryan Merriman), Carrie's sweetheart, to try to warn the potential victims about the fates soon to befall them. Final Destination 3 was directed and co-scripted by James Wong, who also helmed the first two films in the franchise.

Cory Monteith
as Kahill
View All

The 20 Scariest Opening Scenes in Horror Movie History, Ranked
The Killer Body Count Guide
Are You Ready for Final Destination 4?

As a horror flick, Final Destination 3 is literally laughable.

The Final Destination movies may be pointless and crass, but they play on that fascination with malicious efficiency, and 3 is no exception.

Fans of cheap thrills can enjoy FD3 for what it is: A ridiculous teen horror movie that piles on more than enough dry humor and freshly moistened gore to satisfy its lowbrow audience.

If you're a Final Destination fan, it's unlikely that #3 will disappoint. If you like horror/thrillers with plenty of cartoonish blood and gore, this will hit the spot.

Even Hostel showed more respect for the dead

A boring and repetitive sequel...

The film starts to pick up after it begins borrowing liberally from The Omen, even more liberally than the film's two predecessors which, as freak-accident horror films, are by definition Omen clones.

This one regresses the series to what Roger Ebert, back in the splatter-film '80s, dubbed the Dead Teenager genre.

As a forced, unnecessary addition to the series, it lacks a satisfying relationship to its predecessors while simply rehashing the original's plot ...

I'm not sure how much more overkill this franchise can take ....

Morgan and Wong are back for this third film, only with no originality. Everything here is a rehash of the first installment, predictable and gory, with a roller coaster accident instead of an airplane. The tone aims for seriousness but with poor dialogue and an end that is dull and stupid.

This movie is better than the second one but still not as good as the first movie. a group of young people avoid death at a fun fair but death picks them off one by one. The sun bed scene is really horrible.

2 and a half stars

They should have stopped before this movie, things are too predictable now.