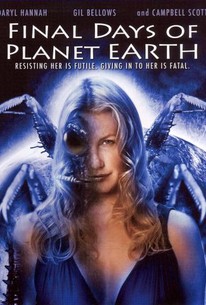 Daryl Hannah, Campbell Scott, and Gil Bellows star in an end-of-days sci-fi thriller about a rogue archeologist who stumbles onto a terrifying alien conspiracy. Lloyd Walker scours the globe in search of answers to mankind's greatest mysterious, and what he's about to discover with forever change the fate of the human race. A series of strange events have been occurring all over San Francisco, and the only one who can make sense of these seemingly unrelated incidents is the archeologist with a bad reputation. Deep within the doomed Pericles space mission, in the enigmatic Room 86, dwells a secret that will illuminate a diabolical plan. A race of alien insects is preparing to enslave all of mankind, and the only one with the power to stop their nefarious mission of the man known as the "keeper of dead civilizations." But will Walker be able to act in time, or is it already too late for the citizens of the third rock from the sun?

There are no critic reviews yet for Final Days of Planet Earth. Keep checking Rotten Tomatoes for updates!

There are no featured audience reviews yet. Click the link below to see what others say about Final Days of Planet Earth!