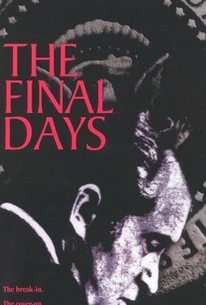 The three-hour TV docudrama The Final Days was based on the Bob Woodward/Carl Bernstein chronicle of President Richard M. Nixon's last months in the White House. Given his behavior during the entire Watergate imbroglio, Nixon cannot help but come off as a paranoid power-abuser. As played by Lane Smith, however, Nixon also seems all too human--a confused, pathetic individual who cannot fully comprehend how, in less than one year, he can lose everything he has worked for in life. Theodore Bikel co-stars as Henry Kissinger, while other participants in the events of August 1973 through August 1974 are played by David Ogden Stiers (as Alexander Haig), Gregg Henry (John Dean), Susan Brown (Pat Nixon), Ann Hearn (Julie), Amanda Wyss (Tricia), Ramon Bieri (John Sirica), Diana Bellamy (Rose Mary Woods) and Alan Fudge (Gerald Ford). Adapted for television by Hugh Whitemore, The Final Days premiered on October 29, 1979.

Critic Reviews for The Final Days

There are no critic reviews yet for The Final Days. Keep checking Rotten Tomatoes for updates!

There are no featured reviews for The Final Days at this time.