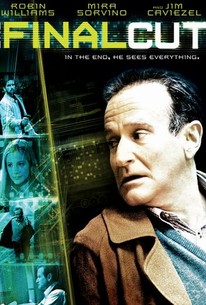 Critics Consensus: The Final Cut fails to make compelling use of its intriguing premise and talented cast, settling for a middling sci-fi drama that never justifies its pretensions.

Critics Consensus: The Final Cut fails to make compelling use of its intriguing premise and talented cast, settling for a middling sci-fi drama that never justifies its pretensions.

Critic Consensus: The Final Cut fails to make compelling use of its intriguing premise and talented cast, settling for a middling sci-fi drama that never justifies its pretensions.

First-time filmmaker Omar Naim wrote and directed the sci-fi drama The Final Cut. Set in the near future, the story concerns a device implanted in the body that is capable of recording a person's entire life. Once it is extracted from the body after death, the footage can be played back on a screen in the form of "rememories." Robin Williams plays Alan Hakman, an editor who cuts together the footage to make pleasant movies for funerals. Tormented by his job and his own memories, Alan also has a troubled romantic relationship with bookseller Delila (Mira Sorvino). While looking through footage for his next project, Alan discovers a man whom he believes is from his own past. Meanwhile, former editor Fletcher (James Caviezel) wants the footage for his own purposes. The Final Cut was shown at the Berlin Film Festival in 2004.

Critic Reviews for The Final Cut

It's not quite as smart as it thinks it is.

It's nice to see Mira Sorvino who has sort of wobbled about since winning the Oscar about ten years ago she is very good in this film.

The lack of imagination, given the initial premise, is astounding.

This first feature from writer-director Omar Naim is unusually accomplished.

When viewed with patience and a somewhat forgiving eye, it presents an intriguing and morally ambiguous story.

Most significantly, the film underscores the fact that the meaning of our lives ultimately comes from somewhere outside of ourselves.

It's the sort of role Williams usually plays in "serious" films; tamping down his manic comic energy always leaves him seeming enervated.

A solid thriller through most of its 105-minute run. Sadly, the film comes to a sudden, and dissatisfying, halt.

Audience Reviews for The Final Cut

Technology is developed that allows recording of one's entire life. Why? So that once yer dead your relatives can make a memorial film clip of your life. While not the expected use of such capabilities it's the set-up for Williams to play a man whose job it is to shape those recorded lifetimes into Disney-fied music videos (cue Phillip Glass-like score). Problems herein include the predictable privacy concerns, a dead tech wizard's possibly incriminating and thus exploitable past, as well as Williams own personally troubling past. It's not bad insofar as a interesting sci-fi idea explored goes, but somehow fails to connect. Williams, Sorvino and Caviezel all perform well for the newbie director/writer Naim who only lacks focus IMO., delivering a tale nicely reminiscent of 1950's pulp sci-fi.

God, I hate Robin Williams! One of the world's most overrated actors is terribly pouty and rigid in THE FINAL CUT. He's not alone, though. Most of the top players in this film are awful as well. Between the script's huge deficiencies, the many plot holes, the underdeveloped characters and Fletcher's (Jim Caviezel) fake beard, the film fails miserably, even more so considering its alluring concept. The score by Bryan Tyler is incredible (and that's about it).

Interesting concept with a somewhat anticlimactic ending. Robin Williams is understated and slightly creepy as the sin-eating cutter, and I always love Jim Caviezel.

The Final Cut is more than just a thriller. It offers a fascinating premise and works on it in an excellent manner. We are shown the damage such "recorded memories" can have but also the peace they can bring to loved ones. Williams centers the film around his fabulously detached performance. He's a man who has lived all his life with the guilt of his own memories as well as spending the majority of his adult life experiencing the lives of others. Opposite WIlliams we have Caviezel who again does an outstanding job as a supposed "villain" with more morals than that of our hero. All points of view are clearly expressed which makes for a wonderfully thought provoking piece of entertainment. Unfortunately not all avenues are explored to their full extent. This would have made one hell of a TV show which could have chronicled Cutting and Rememories from their initial inception. The film is rather complex and doesn't give us an easy answer to the questions it raises. Unfortunately now I just want to know more about the world in which the film is set. For once here's hoping for a remake or TV show in a few decades to further explore a wonderful idea.