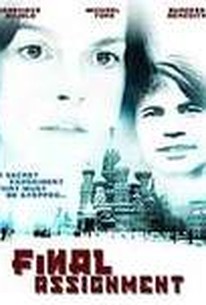 In this complex spy caper, Nicole (Genevieve Bujold) is a Canadian broadcast journalist working on assignment in the former U.S.S.R. She is there to cover a visit by the Canadian prime minister, but along the way she discovers an unethical experimentation on children involving the use of steroids. She is also involved in smuggling out a girl for emergency brain surgery and develops a romantic liaison with Lyosha (Michael York), a bureaucrat in the Soviet press corps. A Jewish businessman she knows just happens to be in Russia, and she asks him to help her in the smuggling attempt. ~ Eleanor Mannikka, Rovi

There are no critic reviews yet for Final Assignment. Keep checking Rotten Tomatoes for updates!

A very poor attemp of making a cold war movie about the soviets. Film made in 1980 about russian trying to keep internal goverment secrets. Movie filmed in Canada, American cars, signs and other Non Russian iotems throughout the film. Film scenes just end with no sense at all. Looks more like a film made for late night TB. 2 stars

I was surprised by the bad performances from the great actors in this movie. It's probably because the story is so boring and slow. I don't recommend seeing this movie.