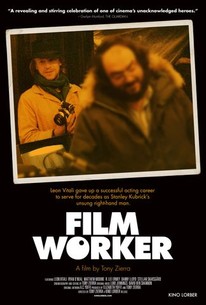 It's a rare person who would give up fame and fortune to toil in obscurity for someone else's creative vision. Yet, that's exactly what Leon Vitali did after his acclaimed performance as Lord Bullingdon in Stanley Kubrick's Barry Lyndon. The young actor surrendered his thriving career to become Kubrick's loyal right-hand man. For more than two decades, Leon played a crucial role behind-the-scenes helping Kubrick make and maintain his legendary body of work. The complex, interdependent relationship between Leon and Kubrick was founded on devotion, sacrifice and the grueling, joyful reality of the creative process. By entering their unique world we come to understand how the mundane gives rise to the magnificent as timeless cinema is brought to life at its most practical and profound level.

Life of the Party Crashes

There's plenty of production detail for Kubrick nuts, though the two competing narratives (Kubrick the genius, Kubrick the tyrant) won't surprise anyone.

"Filmworker" is a first-rate account of the ongoing creative process some call dysfunctional. Well, anyone would call it that, actually. But some would also call it worth it.

"Filmworker's" greatest value lies in pulling the lens back to allow viewers to understand film as a deeply collaborative medium, one in which even the most venerated auteurs cannot accomplish their greatest feats alone.

Whether you're fascinated by Kubrick or the human condition this is a minor classic.

Next time you watch a Kubruck movie, take note of the high-contrast black and white, or of how consistent the colors have remained over the decades. Thanks, Mr. Vitale!

Tony Zierra's fond and slightly unsettling film is, among other things, a reminder of the egolessness necessary for great egos to flourish.

Filmworker works best when poking holes in the altar of genius men whose attention to detail is almost always inexplicably tethered to being an outright bastard.

Twenty feet from stardom, a million miles from sanity

After a while, the anecdotes amount to Kubrick stanning.

There is something genuinely touching about Kubrick's blind faith in Vitali.

Candid and unsentimental, Filmworker is bound to leave an impression on the minds of any cinephile.

Few voices are missing from this incredibly thorough piece of work. Zierra has rounded up dozens of cast and crew members with stories to tell, and though the film is densely packed with information, nothing feels extraneous.

There are no featured audience reviews yet. Click the link below to see what others say about Filmworker!