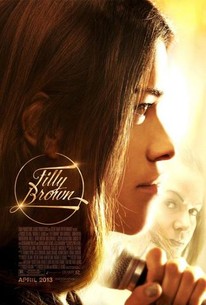 FILLY BROWN is an inspiring and gritty portrait of a young artist's striving to find her voice and seize her dreams without compromise. Majo Tonorio, a.k.a. "Filly Brown," is a raw, young Los Angeles hip-hop artist who spits rhymes from the heart. With an incarcerated mother, and a father struggling to provide for his daughters, a record contract could be the ticket out for her family. But when a record producer offers Majo a crack at stardom, she is suddenly faced with losing who she is as an artist and the friends who helped her reach the cusp of success. Directed by Youssef Delara and Michael Olmos, fused with a fierce hip-hop score, and propelled by an exceptional cast which features Lou Diamond Philips, Edward James Olmos, and the legendary Jenni Rivera in her final on-screen performance, FILLY BROWN heralds the arrival of Gina Rodriguez in the electrifying title role. (c) Official Site

A routine music business cautionary tale, the film shuffles its decks ever so slightly by casting a Latino actress as its lead, but doesn't do enough to shed the exasperating confines of the star-is-born genre.

More heartfelt, humanistic, and entertaining than such a clichéd showbiz cautionary tale has any right to be.

Almost despite our will, the cast keeps us invested in Filly's furious resurrection.

Unfortunately, the film is marred by a story, situations and stereotypical characters that strike all-too-familiar chords.

A trite piece of storytelling, with character development and plot points that feel not so much lived in as borrowed from other movies.

Gina Rodriguez's magnetic star turn keeps this often overwrought film engaging, even when the script lets her down.

However much earnest commitment and passion that the cast lend to their roles, it ultimately cannot overcome the routine structure and approach to the overall execution.

The movie works best as a showcase for Rodriguez, transcending its simplistic script and clichéd plot in snatches -- when its leading lady is at the mike and especially in the film's final awkward family reunion.

Sure, we've all seen this story before, but that doesn't hamper this film from being enormously entertaining, with riveting performances, great beats, and poetic rhymes.

A traditional make-your-way-into-the-music-biz drama with lots of Latin-flavored grit and gravitas.

There are no featured audience reviews yet. Click the link below to see what others say about Filly Brown!