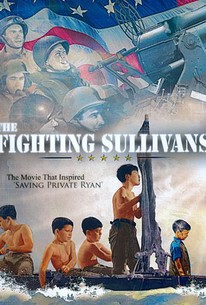 Based on a true story, this gripping WW II-era war drama chronicles the courage of five brothers who bravely fought to save the battleship Juneau after it was fatally torpedoed at Gaudalcanal. Meant to pay tribute to the soldiers who had died and containing some truly heartbreaking scenes, the film was so realistic that audiences, many of whom had lost family and friends already in battle, were unable to bear the grief. Some theaters even refused to show the film, which is also known as The Sullivans.

Bobby Driscoll
as Al as a child

James B. Cardwell
as George

Buddy Swan
as George as a Boy

Billy Cummings
as Matt as a Boy

Johnny Calkins
as Joe as a Boy

Marvin Davis
as Frank as a Boy

Nancy June Robinson
as Genevieve as a Child

Leon Tyler
as Boy
View All

Critic Reviews for The Fighting Sullivans

[Full] of sincerity and intense emotion. [Full review in Spanish]

Audience Reviews for The Fighting Sullivans

well made but heartbreakingly sad film.