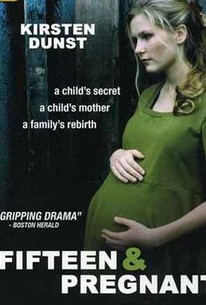 Based on a true story and originally aired as a Lifetime Original Movie, this moving drama zeroes in on a family that is nearly torn apart when the 15-year-old daughter announces her pregnancy. Each person in the clan reacts differently to Tina's predicament. Mother suggests that children shouldn't have children. Tina disagrees and insists on keeping the baby. Her father, already upset by other issues, moves out. Tina's little sister finds herself increasingly ignored and resentful. Meanwhile, at school, Tina's friends drift away as her tummy gets bigger, and though her boyfriend at first promised to be supportive, he then chickened out. Forced to attend a special class for unwed mothers, she meets several others in her situation. Her biggest help during her pregnancy is her 19-year-old friend Laurie who had her baby two years before. But while supportive, Laurie also shows Tina how difficult and exhausting, single motherhood can be.

Critic Reviews for Fifteen and Pregnant

There are no critic reviews yet for Fifteen and Pregnant. Keep checking Rotten Tomatoes for updates!

Audience Reviews for Fifteen and Pregnant

Pretty good as TV movies go, and of course, it's one of Kirsten Dunst's earlier films. Typical lifetime movie, but it's believable. Actually, Kirsten's character is a spoiled brat, which says a lot for her that you still care what happens. The song at the beginning is great too. Shame it seems impossible to track down.

I went on a pregnancy movie kick, go figure. There was a terrible scene though where the doctor just pressed on her belly and then told her that her placenta wasn't in the right place and she wasn't gaining enough weight.

Based on a true story, Kirsten's character Tina is 15 and pregnant. She turns to her mother for help as her boyfriend abandons her.