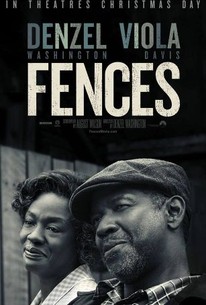 Critics Consensus: From its reunited Broadway stars to its screenplay, the solidly crafted Fences finds its Pulitzer-winning source material fundamentally unchanged -- and still just as powerful.

Critics Consensus: From its reunited Broadway stars to its screenplay, the solidly crafted Fences finds its Pulitzer-winning source material fundamentally unchanged -- and still just as powerful.

Critic Consensus: From its reunited Broadway stars to its screenplay, the solidly crafted Fences finds its Pulitzer-winning source material fundamentally unchanged -- and still just as powerful.

Denzel Washington directed and stars in this adaptation of August Wilson's Pulitzer Prize-winning play, which centers on a black garbage collector named Troy Maxson in 1950s Pittsburgh. Bitter that baseball's color barrier was only broken after his own heyday in the Negro Leagues, Maxson is prone to taking out his frustrations on his loved ones. Both Washington and co-star Viola Davis won Tonys for their performances in the 2010 revival of the play. Stephen Henderson, Jovan Adepo, Russell Hornsby, and Mykelti Williamson round out the supporting cast.

Joshua Tronoski
as Angelo the Italian Server
View All

This is a portrait of a doomed marriage that allows its stars to explode.

Fences is the most classical piece of drama in the best picture line-up for this year's Oscars, with outstanding performances by Denzel Washington and Viola Davis.

Denzel Washington is a class act, and he has given us a classy piece of work.

Fences is a filmed play that never seems anything else: a yatter of life of death, directed by Denzel Washington from August Wilson's Pulitzer-winning 1983 play.

Washington is customarily magnetic, but this is Davis' film.

While Fences is essentially a series of conversations, there's movement, drama, character development and tension at every turn.

This Oscar-nominated film about a black working class family in the 50s is uneven in its delivery, but features powerful performances by Viola Davis and Denzel Washington.

For all the talent on display in writing and acting, FENCES never quite transcends its source: handicapped by its reluctance to stray too far from its reassuringly successful story and cast. FENCES finds itself sitting on one on of its own making.

If you think Washington is impressive, behold Davis.

When the actors shine, the film is next to the flight, but its commitment to its scenic origin creates an authentic narrative fence, a poor understanding of the rhythm. [Full Review in Spanish]

Sure it's a filmed play, but it's one hell of a play.

What really elevates Fences is the acting. This is a richly written ensemble pieces that heavily relies on powerful performances. Denzel and Viola are reprising their roles from the 2010 Broadway revival. [Incidentally, the original 1987 cast featured James Earl Jones and Mary Alice in those parts.] Needless to say, Washington and Davis know their characters inside and out. Denzel is extremely good and Viola is extraordinary. A woman so fully formed that I was even more drawn to trying to understand this individual. She fascinated me. It may be Troy's story in that every part exists to reflect his personality. However, I found myself sympathizing with her plight a lot more than her husband's. She seizes attention whenever she is on screen. The studio may have marketed her achievement as a supporting role to secure an Oscar nomination (and possible win), but she is no doubt equally important in this context. It's her authentic portrayal, as well as the subdued work of Stephen McKinley Henderson as Troy's friend Jim, that I will remember long after having seen the film. fastfilmreviews.com

Like a long filmed play, Fences at least relies on some outstanding performances that compensate for the film's lack of visual inventiveness. Full review on filmotrope. com

Had I seen the stage version I may have enjoyed this script. However, it's move to the big screen is one which didn't work for me. Instead of enjoying this masterpiece, you're trying to climb the 'Fences' to escape it's clutches.

From A Streetcar Named Desire to Les Miserables, bringing a stage play to life on the big screen is a very hit-or-miss genre to tackle. Never having seen the play Fences, nor even hearing about it until 2016 upon the film's release, I had little to no expectations when going into this film. Take an adaptation like Les Miserables for example. Yes, of course it had the staged feel to it, but it was not afraid to change locations on a whim. With this film adaptation of the play Fences, it very much feels like a big-budgeted play, playing out scene for scene on on the big screen. Does Denzel Washington direct this film well? Do his and Viola Davis' performances hold the film together? Here are my thoughts on Fences. This is as simple as you can get. Telling a story with 90% of it taking place at a house, whether it's inside or out, seems to be a boring notion on the surface. Having said that, this film makes up for that with an incredible amount of dialogue throughout its entire duration. Fences follows Troy (Washington) as he works, spends time with his family and friends, and spews out stories about his past, slowly giving insight as to what the outcome of the film may have in store for the viewers who have no prior knowledge of the play. That is really all that can be described about this film without getting into spoilers. This is a life story that takes its time with explaining everything in detail. A film like this can't be made this well without a talented cast though. Fences may or may not grab the attention as far as top film of the year goes, but Denzel Washington and Viola Davis absolutely need to be commended for their commitment to these characters. Washington evaporates into the persona of Troy and Davis into her persona of Rose, his wife. The way they play off each other almost feels like the cameras are rolling on a real married couple. The smile, laugh, get angry, and fight at every single perfect moment. Due to their devotion, there isn't much to pick apart when watching this film. Fences ends up being a great film solely for these reasons alone. There truly is nothing wrong with this film, but I have a few personal issues. Imagine a film directed by Quentin Tarantino, where the characters share a 20-30 minute scene where there is nothing but talking, stretch that into a 138 minute feature film, but strip away the cursing, blood and guts, or any shocking moments. Yes, that is exactly what Fences feels like, but it is a slice of life that many people can enjoy if they are aware of this going into it. It's a series of scenes that lead into one another with ease, making you feel like you are actually watching the play. That may or may not be an acceptable film experience for some, and although it works for me, it does make it seem like less of a motion picture. Overall, Fences may not be able to attract a broad audience, due to its very specific style of storytelling, but it's without a doubt a very well-made picture. It is very rare to see a film told this way, so for that alone I have to give credit where credit is due. With such incredibly powerful performances, direction that is worth noting by Denzel Washington, and a story that is worth sitting through at least once if you have yet to explore any form of it, Fences definitely gets a recommendation from my book. I can't say that I quite loved this film, but I do see many instances where some people might. This is a very well-told and emotionally striking drama that you should check out.