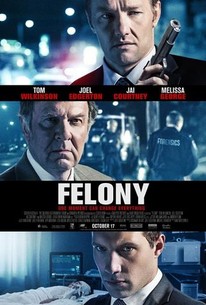 Critics Consensus: Felony covers familiar ground but does so with uncommon style, thanks to a thought-provoking script, sharp direction, and powerful work from a talented cast.

Critics Consensus: Felony covers familiar ground but does so with uncommon style, thanks to a thought-provoking script, sharp direction, and powerful work from a talented cast.

Critic Consensus: Felony covers familiar ground but does so with uncommon style, thanks to a thought-provoking script, sharp direction, and powerful work from a talented cast.

Three detectives become embroiled in a tense struggle after a tragic accident that leaves a child in critical condition. One is guilty of a crime, one will try to cover it up, and the other attempts to expose it. How far will these men go to disguise and unravel the truth? (c) Gravitas Ventures

Murray Scarce
as Dale
View All

A deeply cynical movie masquerading as a complex moral dilemma, the Australian drama "Felony" proves only that skilled actors and slick photography can tart up even the most problematic script.

Starring a trio of top male actors in splendid roles, the intricate, intimate "Felony" is a police story crossed with a perceptive psychological drama.

It's a rare treat to see a suspenseful crime drama delivered with so much nuance and restraint.

There's nothing glamorous about Felony's depiction of police work. These are stressed-out cops, flailing under pressure.

Strong acting all 'round helps, but unfortunately this is just a slow ride to nowhere.

A lifeless Australian morality play about three corrupt police officers who cover up a hit-and-run.

Hardly the banal cop drama its oblique title would imply, Saville's film still lacks a certain finesse that would make this scenario have some sort of lasting impression.

Felony is too close to generic; another story about gruff Australian coppers, and god knows we've had plenty of those. As the moral stakes increased for Mal and his colleagues I found it difficult to care, because I felt as if I'd seen it all before

It's unfortunately weighted down by a plodding pace and a depressing, dull narrative that reveals nothing about the characters or human morality.

It's potentially juicy morality-play material, but Edgerton's script does nothing novel with it, so that most of Felony is a long, drawn-out slog

It's an impressive piece of writing, keeping one hand on formula while the other searches for the truth of the moment, finding all sorts of unseemly and desperate behavior to dissect.

It's Wilkinson who's the true standout as a boozy, belligerent, woefully compromised soul.

"Felony" is a good Australian drama film. "Felony" has great acting from "Tom Wilkinson" and "Joel Edgerton", "Jai Courtney" is not really a good actor but in this movie his acting tolerable. The plot to "Felony" is okay, the plot is that a police detective accidently hits a 9-year-old boy with his car; the police help him cover it up. The ending to "Felony" is not that amazing; in fact it's a bit disappointing. The music in "Felony" is all right. I thought "Felony" was an okay/good film and give it a 6.5/10.

After the biggest drug bust of his career, veteran Detective, Malcolm Toohey (Joel Edgerton), enjoys a few drinks with friends before driving home. On the way, he barely clips a paperboy on his bike, but what should be a minor incident, becomes big trouble when the boy is badly hurt in the fall. Toohey calls the police, telling his fellow Detective, Carl Summer (Tom Wilkinson), that he was driving home and found the boy laying there. Summer believes him and lets Toohey on his way, but his young partner, Jim Melic (Jai Courtney), doesn't believe the story and despite his bosses orders, refuses to let it go. The story here is pretty solid, the investigation and police work that go into it are very interesting to watch. Unfortunately, the movie isn't focused on that, as its mostly about Malcolm Toohey and his conscience. We watch as the man turns into a shell of his former self, as he struggles with what to do next. This should be an interesting sub-plot, but not the whole premises of the movie, as it slows things down tremendously. This film moves at such a snails pace, that the terrific and unexpected ending, become almost farcical. Joel Egerton is really terrific in his role, showing how one split second can change a persons life forever. The whole cast was really good and it's a shame that such talent was wasted. It's not that Felony is bad, it's just slow, and lacks the action a police drama should have. That being said, if you're into watching people battle their inner demons and fight their conscience, you might enjoy this film, but to me, it was somewhat boring.

Pretty damn good movie that unfortunately loses some steam near its climax. The story, while it doesn't cover new ground, does tell a fairly compelling narrative of a good man who makes a mistake and, instinctively, covers up his involvement in hitting a kid with his vehicle while driving drunk. I don't think Malcolm is honestly a bad man, he just did a terrible thing and did what almost 85% of the population will do and that is fear the consequences that will come down on him if his crime is revealed. The story is interesting because there's also another investigation on-going in the film, there's actually two of them, one headed by Malcolm and the other headed by Jim, who's trying to expose Malcolm's misdeeds, and Carl, who helped cover up Malcolm's mistake. I think these two highlight how the justice system tends to work in a backwards fashion. The bad people who premeditated their crimes go free while a good man who made a mistake is being hunted relentlessly. I'm not saying that in these cases of a good person making a mistake, that the person should be forgiven without serving a day in jail, but it is an interesting question to ponder about how we tend to rationalize these acts. Part of the problem is the fact that Malcolm, while drunk, wasn't driving erratically at all and when he did hit William, the kid, it was almost like he grazed him with his car instead of actually hitting him. The impact of Malcolm hitting William with his car was simply not enough, from my point of view, to be anything more than just a light little bump on his head. Since you see everything from Malcolm's point of view, it doesn't seem like that bad of a hit. Of course the head is very sensitive and any kind of rough contact can mess you up pretty good, but with it being so soft, it almost feels like they're overselling the point. If Malcolm was driving a little more erratically, it would've made sense, but with Malcolm actually driving fairly normally, it didn't come across as bad enough to drive William into a coma. That's clearly meant to be part of the moral dilemma. Malcolm was not, in fact, driving erratically. He was drunk, but he wasn't swerving over the road. This, in fact, could've happened to absolutely anybody who was sober. But it was still strange seeing how they make this big of a deal out of something that honestly didn't look that bad. As mentioned, the movie does lose a bit of steam near its climax. Don't know what it was, it just felt like it ran out of interesting questions to ask and it just headed for the nearest exist. The movie does have some excellent acting, though. Joel Edgerton is always great and Tom Wilkinson is as well. Jai Courtney more than holds up his own, but Joel and Tom definitely carry most of the load. The movie is also beautifully shot as well, so no complaints on the technical front. While it does have its flaws, this is still quite a good film that brings up some interesting questions about how we perceive certain types of crimes committed by good people. It's certainly worth a watch, in my opinion.